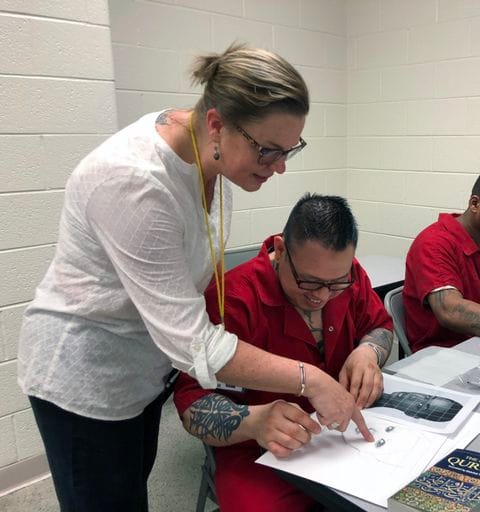 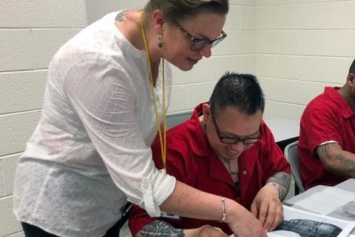 ALEXANDRIA, VIRGINIA – After two months in an art class taught by a volunteer artist, Francis Ramirez rediscovered in jail the artistic talents he had as a teenager.

He is one of about 55 Fairfax County inmates in an art class whose work is on display at the Torpedo Factory in Alexandria. The program is run by Reston artist Kelli Schollard-Sincock and is one of more than 100 programs at the county’s jail aimed at helping to rehabilitate inmates and teach life skills.

Schollard-Sincock said that a manager at the Torpedo Factory asked about displaying the inmates’ artwork and that she jumped at the chance. The artwork is on display Friday through Aug. 31.

“They are beyond excited,” Schollard-Sincock said of the inmates. “They’re so enthusiastic to get to show the work they’re doing.”

Since last spring, Schollard-Sincock said, she has taught more than 200 inmates at the jails in Fairfax County and Alexandria.

Inmates can sign up for the class as long as they have good behavior and attendance, and it has become so popular that two dozen inmates are on a waiting list.

Schollard-Sincock said the program began after she approached Alexandria jail officials in spring 2017 about beginning an art program; she had heard about a similar program at the former Lorton prison. She then expanded her program in the fall to the Fairfax jail, which is operated by the Fairfax County Sheriff’s Office.

Some inmates were reluctant at first, but Schollard-Sincock said she was undeterred. She spends up to 20 hours a week volunteering at the two jails, working with art supplies donated by friends and organizations.

“You make a mistake and you work through it,” she said. “Embrace your mistakes and learn and grow from it.”

Schollard-Sincock, an artist for more than 30 years, said one of her first art students at the Fairfax jail went from drawing stick figures to producing what she calls “gallery quality” work. That inmate is also teaching techniques to other inmates who cannot attend the class.

Her students looked at her in shock. One asked, “Not get paid? Why would you do that?”

Schollard-Sincock responded, “Because I care about you guys and I like you. And, of course, because I love art.”

The students were quiet for a moment. Then, Schollard-Sincock said, one of the students who had been listening said: “You say you come here because you like us . . . . Well, because you do this, you make us like ourselves.”

Although there is little empirical evidence of the rate of success or recidivism of inmates, experts say anecdotally that such classes help inmates with coping skills. Jails usually face no costs, since volunteers typically lead the classes.

“Almost anything you do is going to be helpful to some people,” said June Tangney, a clinical psychology and criminology professor at George Mason University who studies inmates. “With art, there’s actual therapy in being able to express yourself and get in touch with emotions that many people in jails aren’t in touch with, in a safe environment with a caring member of the community.”

Tangney said inmates often do not recognize that some of those who help run rehabilitation and therapy programs in jails are volunteers from the communities to which the inmates will someday return. When they recognize that volunteers are taking time to teach and help, she said, “they tend to rethink the idea that other people on the outside care about people like them, and that means a lot.”

For Ramirez, 34, of Reston, the art class has been a chance to reconnect with an activity he enjoyed as a teenager.

“It’s helped me be in the moment,” he said. “It takes me away from this place. It’s been a blessing to me.”

Ramirez said he does not like to dwell on how he went from serving in the military to becoming a personal trainer and then landing in jail. He is nearing the end of a three-year sentence on charges of child abuse and neglect. Ramirez said his criminal history is “behind me.”

“I made a mistake, and it was a very great mistake that hurt some people,” he said.

In addition to the art classes, Ramirez said, he has learned skills including yoga and anger management, as well as developed a greater understanding of the effect crime has on a victim.

He said he hopes to go to college and become an art teacher for disabled veterans.