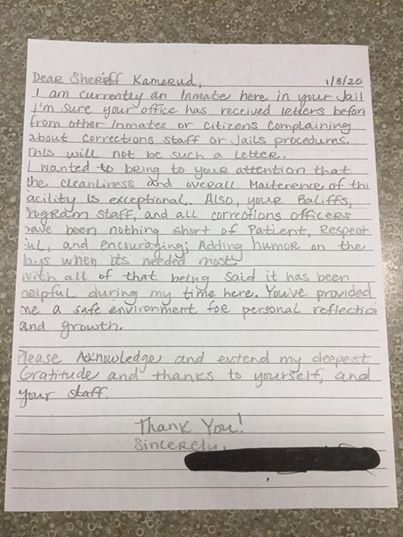 “The cleanliness and maintenance of this facility is exceptional,” read the letter to the Carver County sheriff, neatly printed on notebook paper.

“Also, your bailiffs, program staff and all corrections officers have been nothing short of patient, respectful and encouraging; adding humor on the days when it’s needed most.”

Letters from jailed inmates expressing thanks for respectful treatment aren’t unusual, Sheriff Jason Kamerud said. Praise for conditions inside the 25-year-old Carver County jail, however, is less common, he said.

Nevertheless, jail officials were surprised when the letter made national news after the Sheriff’s Office posted it on social media this month. Kamerud guessed the word might have spread because people were happy to see “finally some positive comments about government.”

It was written by Michelle Lee Schmid, a 51-year-old former suburban wife and mother who since 2012 has visited her share of Minnesota jails, running up a string of nearly three dozen convictions for assorted drug, theft and driving violations. She has seen the inside of the state women’s prison in Shakopee and jails in every metro county, save for Anoka and Ramsey.

In a phone interview from the Carver County jail, where she has been held since her arrest in November on a warrant for damage to property, Schmid explained why she praised the facility. For one thing, she said, she won’t feel the need to take a shower immediately upon her release.

“When you get out of some jails it’s so gross you can’t get it off your skin,” she said. “It’s just jail on you.”