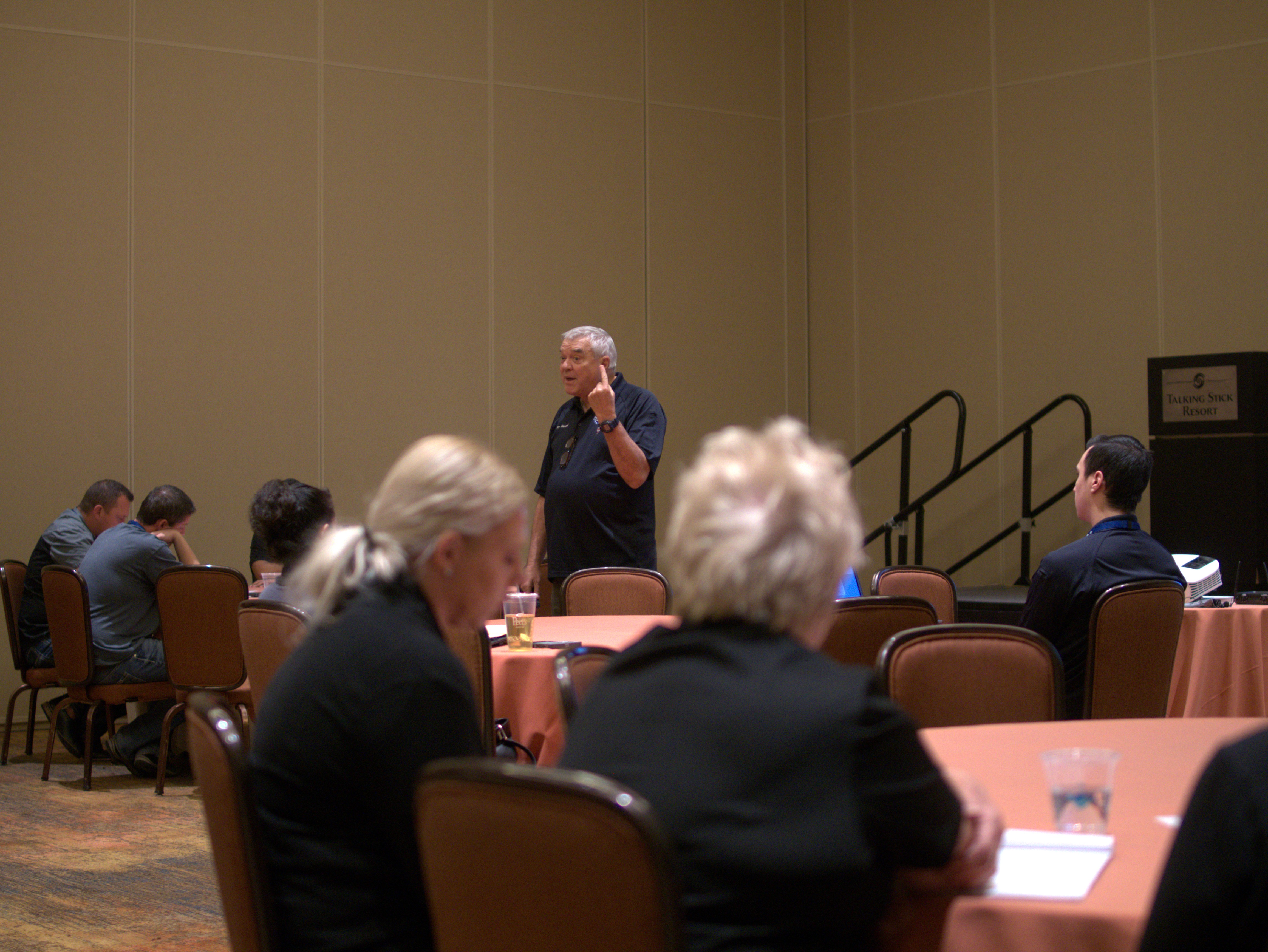 care.  They do not, of course, participate or have a role in the actual direct delivery of medical services.  Sheriffs have a myriad of administrative, law enforcement, search and rescue, and other functions in addition to managing the county’s jail system.  Thus it is necessary for the Sheriff to delegate those responsibilities to jail officials.  Because jail officials are not hired for their medical expertise and qualifications, the delegation does not stop with them–jail officials must also delegate medical care responsibilities.  Jail officials are hired to manage, control, supervise, and provide basic life necessities for prisoners.  Jail officials lack the medical competence to provide medical diagnoses, order treatment regimens, or second-guess the medical diagnoses, decisions, or treatments of the medical professions.  Jail officials should not be looking over the shoulders of medical professionals and second-guessing their routine medical decisions and/or operational protocols.

Beyond providing for routine medical services, a seriously vexing problems is the care of mentally disordered prisoners who refuse to voluntarily accept medication deemed necessary for their care and well-being.  If the health-care professionals have concluded that medication is required, can the prisoner legally be medicated against his/her will?

It is necessary when addressing forced medication and other medical issues, to depend on the expertise and professional judgment of the designated medical providers tasked with providing medical care in the jail.  This does not mean, however, that there is no role for jail officials in matters of forced medication.  This article discusses the process and legal considerations for administering forced anti-psychotic medication.

The definitions applied to prisoners exhibiting emotional problems, psychosis, paranoia, or bizarre behavior ranges from crazy to mentally challenged.  For purposes of this discussion, there are two definitions that will be useful.  The first term  mentally disordered refers to prisoners who suffer from some level of psychosis, neurosis, or other serious mental health disorder; prisoners who have a mental condition which affects mood or thought processes which significantly impairs judgement, behavior, capacity to recognize reality, and cope with the ordinary demands of incarceration.1  The second term, anti-psychotic medication, refers to psycho-tropic drugs used in conjunction with treatment of mental disorder which results in grave disability or the likelihood of serious harm.

Jail officials have an obligation to provide reasonable and adequate care to prisoners with serious health care needs.2   This is true even in circumstances where a prisoner’s mental disorder causes him to refuse essential care.  Prisoners are a population that, under the best of circumstances, are difficult to manage; however, seriously mentally disordered prisoners present much more serious management difficulties for jail officials.  Prisoners have a right to be treated for their serious medical needs.  Deliberate indifference to serious medical needs of prisoners may cause unnecessary and wanton infliction of pain proscribed by the Constitution.3  The courts have consistently determined that serious mental health problems qualify as a medical need.4

Prisoners, however, also have a right to be protected against being involuntarily medicated.   “The forcible injection of medication into a non-consenting person’s body . . . represents a substantial interference with that person’s liberty.”5  The prisoner’s right against involuntary medication must, however, be limited in cases were a prisoner is suffering a serious psychosis.  Psychotic prisoners may include those who are seriously mentally ill or are gravely disabled.  A gravely disabled prisoner is someone who is exhibiting a substantial threat of:

To properly and safely manage psychotic prisoners, it may be necessary to involuntarily treat with anti-psychotic drugs. The first step in the process of involuntary medication of a prisoner is a diagnosis by a psychiatrist that anti-psychotic drugs are a necessary part of the prisoner’s treatment program.   Once such a diagnosis has been made that a prisoner needs to be treated with psycho-tropic or other anti-psychotic medications, the psychiatrist shall inform the prisoner of the diagnosis and the need for the medication and ask the prisoner to consent to the drug treatment.   It is required that consent shall be informed consent.  Informed consent means the prisoner is provided with an explanation of the proposed treatment, including but not limited to an explanation of  the types, dosage, and purpose of the proposed medication; and the  risks of both accepting and rejecting the proposed treatment and any alternative treatments.

The  hearings are not bound by the rules of evidence normally applicable in judicial hearings.  As the U.S. Supreme Court ruled:

We reject [the] contention that the hearing must be conducted in accordance with the rules of evidence or that a “clear, cogent, and convincing” standard of proof is necessary.  This standard is neither required nor helpful when medical personnel are making the judgment required by the regulations here.7

Before involuntary medication should be ordered, majority of the committee members must conclude that the prisoner suffers from a mental disorder, is gravely disabled or poses a serious threat to himself or others, and anti-psychotic medication should be administered.  The committee should memorialize the hearing by preparing hearing minutes or recording the hearing.  The committee shall also document in writing the diagnosis, its factual basis, and the reason medical personnel believe the medication is necessary.

The prisoner may appeal the committee decision to the Sheriff within twenty-four (24) hours of receiving a written copy of the decision.  If the prisoner chooses to appeal, a lay adviser should assist the prisoner prepare the appeal.   The appeal should be handled by the Sheriff, the administrator of the jail’s medical program, and a member of the county board of health.  The appeal decision should be rendered within 24 hours.  The prisoner may petition the Court for judicial review (injunctive or extraordinary relief) if unsatisfied with the decision of the appeal committee.

When all hearings and appeals have been exhausted and forced medication of the prisoner has been approved and ordered, the health-care providers will be authorized to administer the medication regimen recommend by the psychiatrist.  After the initial hearing, involuntary medication can continue only with periodic review.8  After the first seven days of treatment, the committee should reconvene to determine if the forced medication should be continued and re-approved.  The treating psychiatrist should provide continuous review of the case and prepare a report every 14 days for the jail’s health care administrator, the Sheriff, and the Jail Commander while treatment continues.  The committee should meet every 10 to 14 days to reevaluate the need for the forced medication of the prisoner.  Within 180 days after the committee’s initial decision, a full hearing shall be held to determine the need for continued treatment.

In an emergency situation the safety and welfare of staff and/or the psychotic prisoner may be sufficiently threatened by the prisoner’s psychosis or other mental illness and immediate administration of the anti-psychotic medication is necessary and cannot wait on the ordinary committee process.  An emergency exists when, in the judgment of a mental health professional, a prisoner is suffering from a psychosis or other mental illness, and as a result of that illness, presents an imminent likelihood of serious harm to the prisoner, staff, or others.  In exigent circumstances when the administration of medication needs to be administered involuntarily, the medical providers should immediately notify the psychiatrist who has been treating the prisoner.  In the event the jail medical providers do not know if the prisoner is currently being treated by a psychiatrist, the situation should be treated as a medical emergency and contact made with a hospital or mental health clinic for psychiatric services.

As a final note, I would recommend that the writing of a jail’s policies and procedures should reviewed by the county attorney’s office and a psychiatric care provider.