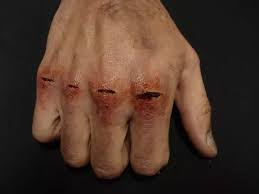 A man awaiting trial on attempted homicide and related charges is seeking $50 million tax-free for a knuckle hurt last year in a prison fight, according to court paperwork.

Joseph Jackson, of Bethlehem, alleges the prison in Easton and PrimeCare, its medical provider, failed to adequately treat the injury from the November attack.

Jackson is not represented in the federal lawsuit but is represented by attorney James Connell in his criminal case. A message left for Connell about Jackson was not immediately returned.

Messages left for prison officials were not immediately returned.

In the handwritten lawsuit filed Feb. 10 in federal court, Jackson said another inmate came into his cell on Nov. 19 to attack him, and Jackson “protected myself and in that process I broke my right, pointer finger knuckle.”

Jackson had a first X-ray on Nov. 22, which came back negative for a broken bone, the suit says.

Jackson saw an orthopedic doctor almost two months later, on Jan. 13, and was reportedly told it was too late for him to receive a cast for the broken knuckle, that it would not heal properly and would never look the same, according to the suit.