Voluntary Exposure in Jails & Prisons–Do your policies protect you?

Voluntary Exposure in Jails & Prisons–Do your policies protect you? 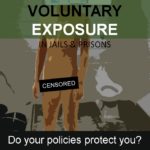 Correctional officers regularly deal with inmates who voluntarily disrobe – actions which can lead to compromising situations that can adversely affect the safety, security, order and discipline of the jail.  Voluntary exposure by an inmate is connected to a variety of key issues that present serious liability and administrative issues which are critical for administrators and officers to know and understand.  While a daily occurrence witnessed by many officers, and often one reported and complained about, especially by female staff, NIJO polls reflect many jail administrations do not have policies which addresses voluntary exposure.1  Rather, staff just “deals with it” in their own operational ways.
Inmates may disrobe in front of staff for a variety of reasons.  This can be in part as an act of defiance or intimidation against staff or other inmates. Such actions may also be due to intoxication, drug use, or mental disorder.  Inmates may also intentionally disrobe in an attempt to prevent staff members of the opposite gender from being able to perform duties in the proximity of the disrobed prisoner.  Gang tattoos may appear which are otherwise hidden to the general population.  Inmates can trigger unwelcomed or uninvited sexual activity with other inmates, compromising the safety, security and order of the jail.  Transgender issues, inmates serving with severe sexual addictions and other disorders may be induced by the exposure.  All of the above represent serious issues and the potential liability risks, and no, the DOJ PREA standards do not address this topic adequately or from a legal-based perspective.
Consider what happens when an inmate disrobes voluntarily. 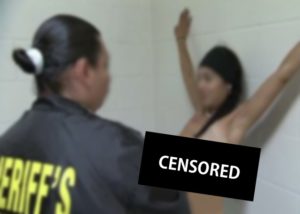 How do these actions relate to privacy issues, officers performing their duties, or disciplinary measures?
Inmate handbooks often state that inmates are required to wear standard issue at all times, yet few handbooks discuss the consequences of actions if that requirement is violated.  How often do you hear callouts from the control room demanding an inmate to put back on the shirt or pants only to have no compliance or have the same request repeated 30 minutes later?  What about officers doing regular checks that have to deal with inmates who purposely masturbate in front of them or other inmates?  And what of cross gender viewing and how the courts will take to those situations when officers are merely trying to do their job and witness voluntary exposures.  Does the right to privacy exist?  Can disciplinary or criminal action be taken?  If so, what is appropriate?
Of equal concern to administrators is the potentiality for staff to file hostile work environment lawsuits when voluntary exposure incidents are repeatedly reported, ignored and continue without being addressed by the administration.  Likewise, PREA and other legislative and court rulings have garnered more attention than ever emphasizing the appropriate interaction of officers and inmates and duty to protect requirements, increasing deliberate indifference claims.
The highest courts in the land have given administrative officials deference in setting policies and procedures.2  Considering the various challenges, penological interests of safety, security, order and discipline, and liability risks to officers and administrators, administrations may want to consider the following factors in developing constitutionally sound policies, procedures and operational practices that work best for their own institution.
REFERENCES:
DISCLAIMER:
This material was written and authored by Tate McCotter referencing copyrighted Legal-Based Jail Guidelines, modified to specific states by NIJO and DeLand & Associates.  Materials herein may not to be distributed otherwise without written permission by NIJO.  The information contained herein is to be used solely for training purposes and shall not be construed as legal advice.  Users of these materials should consult legal counsel to determine how the laws of their individual jurisdiction affect the application of these materials and guidelines to their individual circumstances.
Tate McCotter