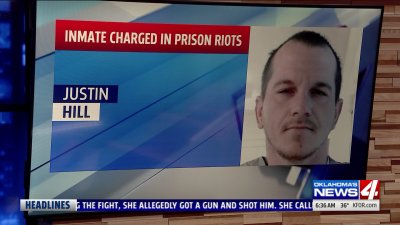 An inmate is facing charges in connection with a series of coordinated prison riots that led to a statewide lockdown.

A statewide lockdown began Sept. 15 after gang fights at six prisons injured 36 inmates and killed 27-year-old Chad Burns. Burns was serving a 15-year sentence out of Tulsa County for first-degree burglary, robbery, firearms possession and assault with a dangerous weapon.

No other fights related to the dispute took place after the Oklahoma Department of Corrections locked down all state prisons and restricted all inmate movement.

Now, officials say an inmate is facing charges related to the riots.

Justin Hill is facing charges of conspiracy, participating in a riot, assault and battery, and taking part in a gang-related crime.

BY: KFOR-TV and K. Querry