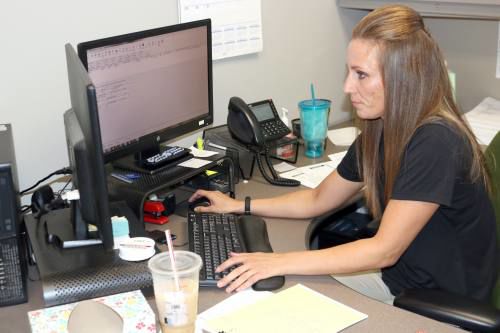 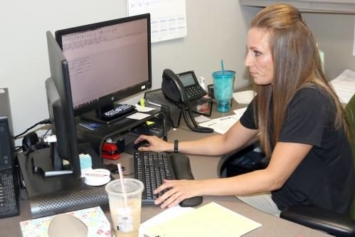 It is not uncommon to see a myriad of papers covering her desk with her looking them over while also looking at her computer screen. She is getting used to and learning about her new job as Wexford County Jail administrator. On her third day as the new jail administrator the newly titled Lt. Henry took time to talk about her new position.

She started on July 16 after she interviewed for the position last month. She was one of six candidates who applied for the job and one of three finalists. She is filling the void left by her predecessor Lt. Greg Webster.

While Webster started working for the county in the 1970s, Henry’s history only dates back to 2015. She said she started as a sheriff’s office administrative assistant in May 2015 before taking on the role of sheriff’s office manager in August 2016.

Although Henry didn’t think she would take over as jail administrator necessarily, she said she definitely knew she would have opportunities.

“I knew when I hired on there was room to advance within the organization. Jail administrator was not in my mind but when it became available I had worked closely with Lt. Webster and knew the administrative side of the position,‘ she said. “I like a challenge. I knew I had the ability to do it and here I am.‘

Although Henry is only in her first week and is working at learning the ins and outs of the position, she does have things she would like to see changed. With the new jail opening less than a year ago, Henry said there is a lot of new technology. Some of that technology is not getting utilized but she hopes to change that.

One example is the how communication is handled between staff and inmates.

“We have the ability to move physical paper communications between inmates to staff to electronic versions,‘ she said.

She also said once she gets her feet under her she would like to see more inmates utilize programs they offer such as the GED program as well as other programs that might help the inmates re-enter society after their sentence has been served and not return to jail.

Although there is potential for the county to start taking out-of-county inmates which could generate money, they are currently not going to look into that. The reason is simple: They are still two corrections officers short and until the facility is fully staffed it doesn’t make sense to add to the jail’s population.

In addition to staffing issues, Henry said another challenge has been the issues associated with moving into a new facility.

Wexford County Sheriff Trent Taylor said he believes Henry will be a good fit in the position and moving the jail forward.

“We are excited about her taking this position and the future of jail operations are going to be heading in a new direction,‘ he said. “We are looking forward to that.‘