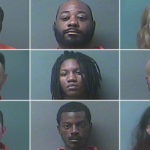 Posting bond online at the LaPorte County Jail has been discontinued for now after seven inmates with help from people outside were released on bail posted with stolen credit card numbers.Ten people, including two from Chicago and one from Highland, are charged with fraud.

According to LaPorte County police, Shakyia Bunch, 29, of Chicago, acquired the credit card numbers from her job at a hotel in the Chicago area.

Her inmate boyfriend, Gregory Brown, 35, also of Chicago, recruited offenders who paid a fee for having their bond posted with the stolen account information.

After hearing back from Brown, police said Bunch entered the credit card numbers into the online bonding system for each participating offender released once the data entries made their way into the jail record books.

Once they got out, the inmates forwarded their payments to Jeneva Sutton, 35, of Michigan City, who placed some of the money on the commissary account at the jail for Brown, said LaPorte County police Officer Andy Hynek, who helped unravel the scheme. Sutton is another girlfriend of Brown, police said.

She kept whatever she didn’t place on his account, he said.

Commissary accounts are used by inmates to pay for snacks and personal hygiene items and other things like online video visitation from their cells with loved ones at home.

Hynek said there’s no evidence Bunch received anything except Brown having the financial ability to visit with her online and call her on the telephone from the jail.

“He told her to do it and she did it,” said Hynek.

The scheme was run from April until the middle of this month when a jail officer, Cpl. Ryan Jones, noticed unusual activity during an inmate’s attempt to post bond and contacted Hynek.

Hynek said he discovered two withdrawals for $7,500 apiece from the same account belonging to a woman from St. Louis, who didn’t know the money was taken from her account until contacted by police.

Everyone who fraudulently posted bond has been taken back into custody, police said.

One of the suspects, Toni Dominguez, 34, of Highland, delivered a car to Sutton as collateral for the $3,500 fee owed for the $15,000 bond posted for her inmate boyfriend, Edward Jiminez, 34, of Michigan City, Hynek said.

Dominguez and Jiminez are both charged along with inmates Rischa Bonds, 36, William Jackson, 35, Robert Lambert, 28, Daniel Gumns, 27, all of Michigan City, and Raynell Henry, 22, of Gary.

Hynek said the inmates charged were originally in the jail for a variety of offenses.

The credit card numbers belonged to people from as far away as the Los Angeles area, Granite City, Illinois, and Grand Rapids, Michigan, police said.

All credit card transactions for posting bond have been discontinued under a 30-day order issued by all of the judges in LaPorte County.

Once changes are made in the system to make it more secure, a decision will be made whether to lift the order.