Many facilities across the country photograph the tattoos of incoming detainees. The photographs of these tattoos are used as a classification and identification tool. 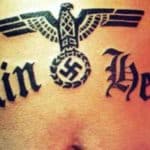 One of many informative variants that can be obtained from these tattoos are links or ties to gangs and or security threat groups(STGs).  Furthermore,

these photographs can also be used as possible identifiers of an individual at a later date and time.  On many occasions the victim of a crime may only be able to see or remember a tattoo.  This may be the only information provided to Law Enforcement.

Photographing of tattoos is the least intrusive and most reliable and accurate form of documentation.  If Identification Technicians were to attempt to document a detainees tattoos in writing, it should be obvious that a detainee would have to be exposed for a much longer period of time to accomplish the task.  The tattoos would be documented based on the Identification Technicians understanding of what they were looking at.  The tattoos could be misconstrued as to what it looked like or its meaning.  The Identification Technicians cannot just ask people what tattoos they have and document the tattoos and its location.  It has been my experience when asking a detainee what tattoos they have and where they are placed on their body, the detainee is likely to be misleading with the information provided.

Jails typically book substantial numbers of detainees who are involuntarily confined, most of whom tend to not be honest, veracious, cooperative or compliant. The challenge is made more difficult for officials because they often have little information about or access to the detainees’ histories, attitudes, propensities and threat levels.  Detainees are often uncooperativ 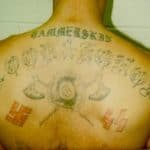 e, unpredictable and deceptive.  It is my opinion the most accurate and less intrusive way to document a detainees tattoos is to photograph them.  A photograph of a tattoo is the most accurate description of the tattoo.  If the identification technicians were to attempt to depict a detainees tattoos in writing, it would be based on that individual identification technician’s understanding of the tattoos.  This scenario could lead to an improper depiction and a misrepresentation regarding the meaning of a detainee’s tattoos.  The tattoos could also be inaccurately described as to their placement/location on the body.

It has been my experience that a specific meaning of a tattoo may not be evident at the time of documentation.  Having a photograph memorializing a detainees’ tattoos allows for further inspection at a later date and time.  Further scrutiny of a tattoo can take place when more specific information is obtained about the significance of a tattoo.  For example, a detainee has his/her tattoos photographed.  Nothing stands out on its face as related to any specific gang or security threat group.  At a later time, information is obtained that a symbol/tattoo has been identified as gang/STG-specific.  Photo retrieval of individual detainees can be re-examined to confirm or exclude gang/STG involvement. This allows staff to adjust classification if the detainee is still in custody or identify the detainee as a gang/STG member if he/she comes back into custody at a later date.  This scenario is not possible with a written description of a tattoo. To state it simply “A photograph is worth a thousand words.”

Gang members and individual members of security threat groups will attempt to hide the meaning of their tattoos from staff to avoid detection.  At the time a tattoo is documented/photographed, its meaning may not have been evident to staff.  The significance may only come to light after information has been distributed and obtained regarding what a specific tattoo may imply or what meaning it may carry. This process can take days even months to accomplish.  An investigator in one facility may have to reach out to additional investigators within other facilities and request assistance in the recognition of a specific tattoo.  Once the tattoo has been deciphered and recognized as gang/STG, related adjustments can be made in the detainee classification process.  Staff can adjust classification if the detainee is still in custody or identify the detainee as a member of a specific gang/STG if he/she comes back into custody 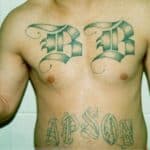 at a later date.  Again, this scenario is not possible with a written description of a tattoo.

The understanding and deciphering of gang/STG tattoos provides better information to detention facilities regarding the process of proper classification of detainees.  A record of tattoos is essential to this purpose.

The importance of photographing tattoo identifiers also allows for jails/detention centers to assist law enforcement agencies in identifying suspects and victims of violent crimes.  Thus, aiding in arrests of violent criminals and subsequently protecting citizens from being victims of further criminal acts.

Over the years important identifiers, such as finger prints, DNA and intake photos, “mug shots,” have been used to identify suspects and aid in solving crimes.  Tattoos have come to be just as significant as these other important identifiers.  As a personal example, tattoos have been used by myself, and by my staff, to identify dangerous violent criminal suspects.  Through this identification process, we have been successful in removing these criminals from our city streets.  As a result, providing a safer city and protection from violence for our citizens.

As stated, by a Tucson Police Department (TPD) Detective, in correspondence directed to me via E-Mail:

TPD detectives send officers an “Attempt to Identify Flyer” on a daily basis.  If the photo in the flyer is clear enough and /or if there are any tattoos, marks or nicknames described, I would forward a copy of the flyer to your staff.  I do not have a specific count, but I know they have been able to identify at least 25 of the people in the flyers.  I would like your department to know that their help is very much appreciated.  Most of the flyers I have sent over were for violent crimes.  Being able to identify the suspects in these crimes, helps to get them off the street before they can hurt someone else.

The following is yet another personal example:

A few years back, an individual was booked into the Pima County Jail.  A couple of days after his arrest and subsequent booking into our facility, the Las Vegas Homicide Unit issued a warrant for his arrest.  Furthermore, they placed a hold on him for extradition to Las Vegas, Nevada, on murder charges.  At some point, during the court proceeding, a Superior Court Judge ordered him temporarily transferred to the Arizona State Hospital (A.S.H.).  The temporary transfer was mandated to determine his competency.  Thereafter, the inmate escaped from A.S.H.  He was able to make a dummy which he then placed in his bed just prior to th 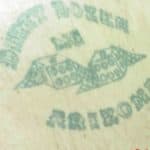 e escape.  He then continued to break out of a bathroom window and flee through an opening in the bars.  I was alerted to the fact that the inmate had altered his appearance during his stay at the state hospital.  He had grown out his hair and grown a beard.  With this information in mind, when the Attempt to Locate (ATL) was produced for circulation, I specifically added photographs of his tattoos as identifiers.  Furthermore, I recognized these tattoos to be important identity-confirming attributes that could aid law enforcement in the apprehension of this individual.  Twenty four hours after his escape, the escapee was apprehended.  In due course, The El Mirage Police Department, informed me that the photographs of his tattoos were instrumental in the apprehension.

As further stated in a newspaper article regarding the escape and capture:

At first he denied being the escapee and said he was just trying to catch a ride to Las Vegas.  But the sergeant recognized his tattoos, and eventually he gave up and told officers, “God helped me escape.”

These are just two examples, of many situations, involving myself or my staff which demonstrate the vital necessity of photographing the tattoos of detainees.  As demonstrated by these examples, an individual’s tattoos are crucial to identification and are used as important descriptors.  Photographing of tattoos undeniably assists law enforcement in identifying suspects of violent crimes and aids in criminal arrests; thus making our city streets safer, and protecting our citizens from violence and criminal actions.

The process of photographing and identifying tattoos is related to a legitimate penological interest.  A concrete foundation has been set down establishing the importance of photographing tattoos and their recognition within detention centers.  Additionally, the base encompasses the reasons that support the worth of photographing tattoos and the value carried by such photography in serving as “identifiers” to aid law enforcement agencies.  Furthermore, the reasons demonstrate how photographing tattoos is an important piece to the classification process carried out by detention facilities to provide safety and security for detainees and staff alike.  Tattoos are an important identification feature necessitating documentation by the best means possible–photography.  This documentation can serve for future reference and to assist law enforcement in the identification of dangerous suspects in the community.  Tattoo photos can greatly impact, to a high degree, law enforcement’s ability to get criminals off our streets and in so doing protect our citizens.

It is my opinion, the procedure and practice of photographing a detainees tattoos, for classification and identification purposes, is legitimate and necessary as pertaining to maintaining a safe and secure facility and in the safe keeping of the community.  Therefore, photographing a detainees tattoos is related to a legitimate governmental interest.

In Turner the court states:

“…Is there a “valid, rational connection” between the policy, regulation, or action and the legitimate governmental interest put forward to justify it?”1

In Florence the court states:

“Maintaining safety and order at these institutions requires the expertise of correctional officials, who must have substantial discretion to devise reasonable solutions 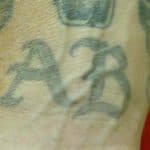 Jails and prisons also face grave threats posed by the increasing number of gang members who go through the intake process.  See Brief for Policemen’s Benevolent Association, Local 249, et al. as Amici Curiae 14 (hereinafter PBA Brief); New Jersey Comm’n of Investigation, Gangland Behind Bars: How and Why Organized Criminal Street Gangs Thrive in New Jersey’s Prisons . . . And What Can Be Done About It 10 11 (2009). “Gang rivalries spawn a climate of tension, violence, and coercion.” Carlson & Garrett 462.  The groups recruit new members by force, engage in assaults against staff, and give other detainees a reason to arm themselves. Ibid. Fights among feuding gangs can be deadly, and the officers who must maintain order are put in harm’s way. PBA Brief 17.  These considerations provide a reasonable basis to justify a visual inspection for certain tattoos and other signs of gang affiliation as part of the intake process. The identification and isolation of gang members before they are admitted protects everyone in the facility. Cf. Fraise v. Terhune, 283 F.3d 506, 509 510 (C.A.3 2002) (Alito, J.) (describing a statewide policy authorizing the identification and isolation of gang members in prison).3