Anyone who has worked a short time in intake or booking can quickly justify the need for conducting searches of those being admitted.  There are countless documented circumstances in every facility where arrestees have tried to smuggle in various types of contraband, reporting everything from loaded revolvers, knives, cell phones, stashes of drugs and paraphernalia, handcuff keys, pornography, and even a family size can of chili.  (According to reports, he told officers he had put it in his “jockey box” so he could keep it warm.)   The safety of the officers as well as to protect the inmates from one another and perhaps themselves depends upon proper searches to ensure weapons and other contraband is interdicted before inmates enter the jail.

While the importance and need for such searches are obvious, they are not always given top priority or proper attention in actual operational practice.  This is for a variety of reasons, albeit none should be acceptable.

Perhaps the most common reason for failed searches upon admission is the shortage of staff.  Many facilities, when stretched with limited officers on shift, pull from intake and booking to cover other areas.  Remaining staff may incorrectly rely on the searches supposedly conducted by the arresting officers.  This practice should be reexamined.  Not all arresting officers from allied agencies conduct thorough searches at the time of arrest and to rely upon them creates significant risk to the facility and staff.  There have been many instances where arrestees successfully smuggled in contraband and weapons, only to be caught by jail staff during change out for general population hours or even days later.  Sadly, many of these occurred even though the arresting officers stated they had already searched the arrestee.  If proper searches had been conducted upon admission by trained jail staff, these situations could have been avoided.  Why not rely on allied agencies to perform admission searches?

First, jail officers are unarmed.  It is in their own best interest to guarantee their own staffs’ safety and conduct their own searches immediately upon entry to the facility rather than rely on others.  During the time of arrest, an officer may be distracted or be in a situation that would make it somewhat impractical, unreasonable or embarrassingly intrusive to conduct a proper search on the street.  Rather, a more private and thorough search can be and should be performed by jail staff at the jail.   Even the Supreme Court recognized a greater need for law enforcement officers to search inmates after being taken to a station house – a concept that applies with more urgency to persons being incarcerated.1 Governmental interests underlying a stationhouse search of the arrestee’s person and possessions may in some circumstances be even greater than those supporting the search immediately following arrest.  Finally, jail staff routinely conduct searches and are trained to look for and notice things that perhaps other arresting agencies would not notice.

Another reason for failed admission searches is a sense of complacency.  There may be an attitude created through the daily grind of work that numbs the attention toward safety and security.  This can happen at intake, too.  A frisk or rub search might be dismissed altogether with familiarity of a particular frequent flyer arrestee or limited to a few quick pats rather than a proper, thorough search.  The lack of routine or training, especially with newer officers can also be a factor to failed searches.

Justification of strip searches, as outlined by the Supreme Court, includes the discovery of contagious diseases, identification of gang members, and the interdiction of contraband control.   It is interesting to note the court found intake strip searches as a “mos 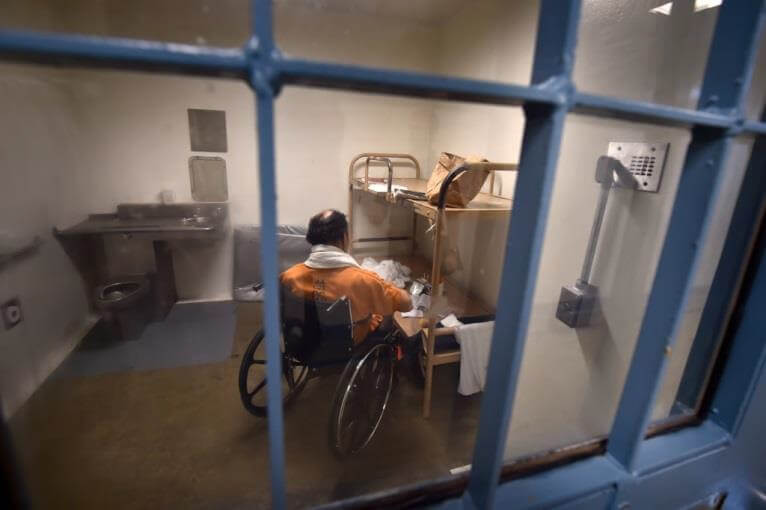 t serious responsibility” necessary to detect contraband concealed by new detainees, noting that weapons, drugs, alcohol, and currency all disrupt the safe operation of a jail.4 The Court also recognized that correctional officers have had to confront arrestees concealing knives, scissors, razor blades, glass shards, and other such items on their person.5