On September 6, 2018 inmate Tyler Tessier, waiting to stand trial for the murder of his pregnant girlfriend, was found dead in his cell hanging from a sheet – just 10 minutes after he picked up his breakfast.  Sixty-four days earlier, inmate Thierry Nkusu had successfully used the same approach, also using his bed sheet to hang himself.  His death came 48 hours after he was sentenced to life without parole.  Following these two suicides, the Montgomery County jails Corrections Director Robert Green began looking for some answers.

“We are looking at what our options are.  It doesn’t mean we’re blaming (the sheets), but we know that’s an option”  Robert Green said referencing the decision to remove all sheets from the facility.

As part of the solution, they opted to replace all the sheets and double up with blankets.

Many jails struggle financially and issuing these items regularly while keeping inmate hygiene, safety and security checked is extremely challenging.   It is important for an administration to know when setting policies and procedures governing the issuing of bedding and clothing what is actually required by law and what isn’t.

When it comes to conditions of confinement, the Supreme Court in Wilson v. Seiter made it clear that some conditions of confinement may establish constitutional violations.2  Many states have their own statutes that generally require clothing and bedding for those incarcerated; however details of exactly what those things are specifically are not always addressed.  This leaves topics like issuing bras, underwear or identifying what type of bedding in the hands of the administration.  Courts have generally deferred to administrative discretion to set policies and procedures, understanding the variances that exist facility to facility, the differences in available resources and the individual circumstances of inmates which may limit what is issued even if available.  Both clothing and bedding are included by the Supreme Court among the basic necessities of life, thus officials should address the issuing of both in policies and procedures.

Jail Issued Clothing.  A uniform or jail-issued clothing set is often provided to inmates instead of permitting inmates to wear personal clothing.  In addition to advocating good hygiene among the inmates, there are several safety and security reasons why agencies may not allow inmates to wear personal clothing while incarcerated.  Justification includes preventing the introduction of contraband or weapons into the jail (we have all seen underwear provided by “grandma” laced with drugs; shirts with shanks sewn in, etc.).  Jail issued clothing also provides the benefit to protect against lice, other vermin or transferable filth from the outside.  A jail issued uniform may also aid to prevent escapes.  Uniforms quickly identify inmates to the public – within a facility and without, such as after an escape, as part of a work crew or to quickly distinguish the inmates from jail visitors.    Jails that use different color uniforms may choose so to identify an inmate by certain classification levels, allowing staff to easily monitor and recognize inmates.3  This may also be useful to avoid or reduce the potential for inadvertent release.4

Some jails do allow outside clothing to be purchased or brought in under certain conditions, primarily because of budgetary reasons.  Generally these items include underwear, bras (for females), work release/crew clothing, and footwear.  If an administration allows any outside clothing to be admitted and worn by inmates, there should be strict policies and operational procedures governing the limitations of what is allowable and what isn’t (i.e., wire supports with bras) as well as procedures and training for the searching of personal items brought into the jail before they are given to the inmates.   Special attention and monitoring should also be provided to ensure the introduction of personal clothing doesn’t result in inmates using such items for bribes, inmate-on-inmate assaults, or other inappropriate consequences and avoid potential issues that may arise with one inmate having something another does not.  There are numerous accounts of inmates getting attacked or bullied because of their expensive name brand shoes, for example.   Commissaries may provide inmates with the opportunity to purchase additional clothing, such as socks, bras and underwear.

It should be noted that some transgender inmates are challenging administrations in the courts on what is actually issued to them.  Some have argued they should receive bras, for example, even though it may not be medically necessary.  A recent case in Florida against the Department of Corrections required officials to permit a transgender male (transitioning to female) access to the same clothing, undergarments, female toiletries and grooming standards as other female inmates.5  This trend will likely continue as inmates and advocate right groups use #Me Too and other platforms to further their agendas.6

Bedding.  “Two sheets or not to sheet – is that the question?”  Bad pun, most definitely yes – but certainly a worthwhile question many administrations face.    Bedding is included by the 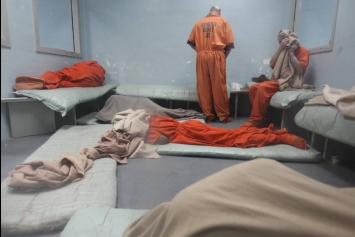 Supreme Court among the basic necessities of life and failure to provide it over a significant period of time may, depending on the totality of the circumstances, allow inmates to state a cause of action under the Eighth Amendment.7  There are two primary legal issues with the issuing of sheets and blankets as it relates to this particular guideline:  general conditions of confinement (temperature; sanitation) and duty to protect (proactively preventing suicide risks). To address sanitation and warmth, the majority of jails issue at a minimum two sheets or one sheet and one mattress cover (blankets may be freely substituted for sheets).

A jail is not a Motel 6.  An inmate has no freestanding rights to choose sheets versus blankets.  The jail only need to provide adequate bedding based on the above factors.  If a jail has colder temperatures, administrative discretion may opt for issuing two blankets and no sheets.  If a jail happens to be older and experiences regular cooling difficulties, it may opt to issue sheets to avoid dehydration concerns.  Some decisions may be made to address temporary condition of confinement issues, such as issuing extra blankets or sweatshirts if a heating furnace goes out unexpectedly.

Whether an administration issues sheets or blankets may also depend on potential duty to protect concerns.  Officials may have a “blanket” policy issuing blankets only because of concerns that sheets could provide inmates with potential suicide implements, such as explained at the beginning of this article.  Officials can also have a policy which allows staff to remove sheets if an inmate is experiencing suicide ideation.8  Whatever the decision, inmates should not be subjected to prolonged exposure to low temperatures with no means of keeping warm, even if they are on suicide watch.9  It is up to the jail administration to determine how best to handle temperature control with inmates experiencing suicide ideation.

All issued bedding should be laundered regularly.  This will help maintain a clean jail environment and reduce potential for the spread of vermin or disease.

Because inmates may sue on administrative discretion issues, it may be useful to know what is necessary for them to successfully state a cause of action.   Take for example an inmate who tries to sue because the administration issued blankets instead of sheets.  This is a warmth and sanitation issue.

If the inmate is a pretrial detainee, he has to show:

If the inmate is sentenced, he has to prove:

While there is much more information contained with this guideline, it was purposely written to provide the flexibility that is afforded with administrative discretion but still provide the framework to protect a jail administration against potential pitfalls by knowing what the law requires related to the issuing of clothing and bedding.