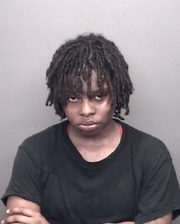 A confinement officer at Vanderburgh County’s jail was sent to the hospital after she was allegedly assaulted by an inmate.

The officer was in a housing unit when she was attacked by 24-year-old Alexius Neal, according to a probable cause affidavit from the Vanderburgh County Sheriff’s Office.

The security footage allegedly shows Neal shoving the officer before the fight. Neal then strikes the officer several times before taking her to the ground, where she continues to hit her.

Two inmates helped the officer, according to a news release from the sheriff’s office. Neal was detained after more confinement officers arrived.