BE DEFENSIBLE:
Knowing the Differences Between National Standards, Contract Agreements and Legal-Based Guidelines

BE DEFENSIBLE:
Knowing the Differences Between National Standards, Contract Agreements and Legal-Based Guidelines 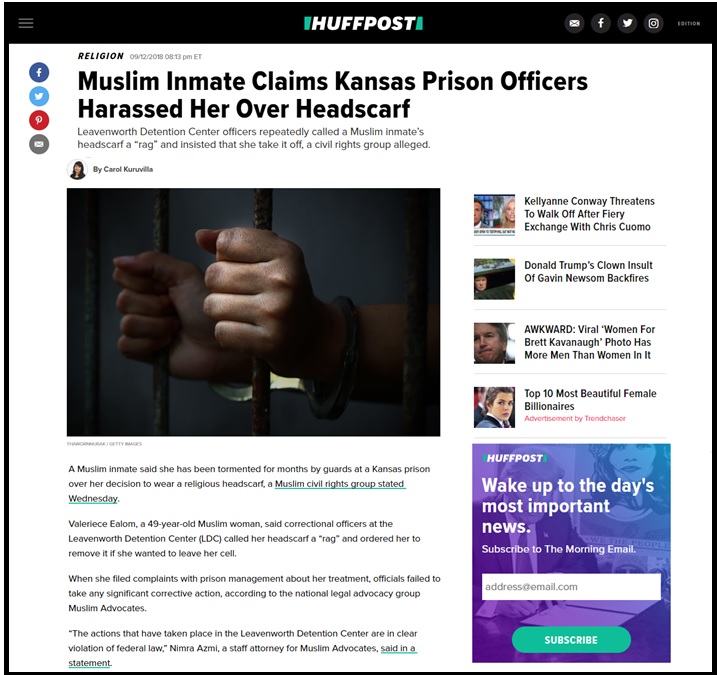 Harassed Her Over Headscarf.”1  The news article explains how the national legal advocacy group Muslim Advocates notified the Leavenworth Detention Center (LDC), the Department of Justice and the US Marshals Service the “actions that have taken place in the Leavenworth Detention Center are in clear violation of federal law,” Nimra Azmi, a staff attorney for Muslim Advocates, said in a statement.  The group is alleging religious right violations and failure to meet and ensure compliance to federal detention standards.

A strong defense is always needed to show policies, procedures and the actions of individuals did not violate clearly established laws.

How confident are you in your current policies and procedures?  Where do they come from?  Are they based on national standards or contract agreements with a federal agency for inmates you contract to house in your facility?  If you are following them are you legally safe?

Some administrators (and inmates and advocate groups) assume that the score on their last federal audit or the fact they are nationally accredited is a solid defense card.  This simply is not true.  While audits and the accreditation process can be useful for discovery, verification and documentation, they are only as good as what is being measured!  Generally what is being measured reflects what the outside agency thinks is most important.  They also only reflect a snapshot in time and cannot possibly capture everything that may be occurring in the jail on any given day or shift.

In short, how do you know if your jail is legally defensible?  So, here’s a question to consider in answering that question: When was the last time your jail was audited to what the law requires?

National standards, often referred to as “best practices” have been created by various groups promulgating their requirements to facilities as the “best” and also as a means to beat inmate filed lawsuits.  However, national standards have been repeatedly slammed by the highest courts of the land.  For example, according to the Supreme Court (referring to standards written by the Department of Justice):

“[R]eliance on . . . correctional standards issued by various groups is misplaced . . . . And while the recommendations of these various groups may be instructive in certain cases, they simply do not establish the constitutional minima; rather, they establish goals recommended by the organization in question.”2

Consider that ruling as it relates to possible policies and procedures required by the DOJ PREA standards such as where to house a transgender inmate, dealing with an ICE detainee who has special mail requests, allocated DOC inmate exercise time, or even general staffing requirements.

Why aren’t national standards (and related policies and procedures) defensible per the courts?  Because they are not solely based on the law!  The fact they are “national” gives a good measure to question whether such standards truly are defensible for your facility.  Do they address the specifics as outlined in YOUR state statutes?  What about YOUR circuit court?  Do they support Supreme Court rulings and address congressional acts like RLUIPA and PLRA?  Often it is assumed such standards are based on case law, but often standards are created by a group who are applying a set of broad-based rules to create uniformity and ease for the administration who promulgates those standards – not necessarily for the facility, nor do they consider case law.  If it worked for them in their facility, it must be good everywhere, right?  This approach and mentality discounts these facts for defense evaluation:

As a rebuttal, national standards authors claim they have set a “higher” standard than what is required by law, which in their interpretation provides an elevated defense cushion.  However, these higher “liberty interests” as set by various organizations are not necessarily determinative of the requirements of the law.3  Such standards may not adequately address what is actually required by law (various circuit courts and certainly states vary in their laws – one size cannot fit all even to a higher standard) and in some cases, they may far exceed what the law requires.  Compliance to those liberty interests and standards are certainly up to the voluntary discretion of any administration, but compliance may come at a significant financial cost, perhaps compromising safety and security, and coupled with policy and procedural changes necessary to meet those voluntary requirements.4  Unless standards are modified specifically to the laws pertaining to your facility, they cannot be inclusive.

Many county jails have entered agreements to house inmates in their facilities with federal and state agencies (ICE, US Marshals, state DOC for example).  This can be confusing because often these outside organizations refer to standards when they are in fact contract compliance requirements.  ICE publicized standards, for example, do NOT apply to American citizens, legal aliens, or even all illegal aliens.  They only apply to illegal aliens being housed in facilities under ICE contracts.

There is a reason why the contract agreement is being entered.  The outside organization gets the bedspace they need from a facility.  The contracting jail receives funding for housing the inmates.  Unlike standards and while not publicized, every contract agreement is customized for a specific purpose and no two agreements are exactly alike.  For housing agreements with jails, each must consider the unique features and resources of the jail (location, design, available programming, resources, bedspace, etc.).  A contract agreement may have general stipulations but customization occurs regularly and negotiations are standard and expected.  In short, there may be things in a contract that can and should be examined.  Contract requirements are not determinative of the law but rather set expectations for services provided by each party.  Audits and inspections generally will reflect a verification of their requirements but a pass/fail does not determine the jail is operating according to what the law requires.  This leaves a huge gap for any administration wishing to be legally defensible and run a constitutionally safe facility.

agreements in that they are based on case law, statutes, and objective research specific to the state for which they were written.  No set of guidelines can be the same from one state to the next.  The LBJG provide flexibility to operate uniquely with administrative discretion6 according to what the law requires.  This is why they are used in hundreds of jails from 5 to 3000 beds.  Here are some of the ways they are utilized:

For those that want to find out more about the Legal-Based Jail Guidelines for your facility, contact NIJO.  If your agency is already using the LBJG, please note the mere existence of the LBJG provides no magical protection against civil rights violations.  They are of limited value with defending inmate litigation, crafting legal-based policy, procedure or training if they are not utilized aggressively.